The first Filipino fatality in Kuwait is a Filipina who worked at a salon in Salmiya.

According to Arabtimes Kuwait, the Filipina was taken to the Jaber Hospital but soon succumbed to COVID-19. Connie Laureano, 44, passed away without seeing her children in Lebak, Sultan Kudarat, Philippines. She was an eyelash expert at the salon.

Laureano was taken to the Mubarak Al Kabeer Hospital last April 22 after experiencing difficulty in breathing. Soon, she was transferred to Jaber Hospital where she tested positive of COVID-19. This information was disclosed by her sister Erlyn Tamao who is also in Kuwait as a household service worker.

Tamao couldn’t believe that she lost her sister in very quick. However, before she was confined, Laureano often complains about not feeling well. 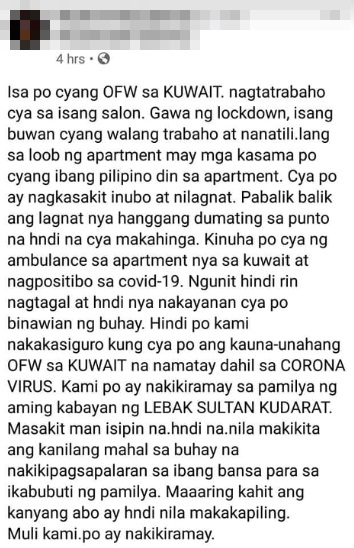 “It’s been three days that she wasn’t feeling well so I advised her to go to the clinic or hospital but she told me she will be fine and she will just take some medications at home.”

On April 22, Laureano called her sister complaining of breathing difficulty. She can’t even breathe properly while on the phone. She was then taken by the ambulance to the Mubarak Hospital.

“That was the last time I spoke with her and then yesterday afternoon, I was surprised by so many missed calls and I got a lot of condolences on Facebook. She’s gone,” says the OFWs sister. 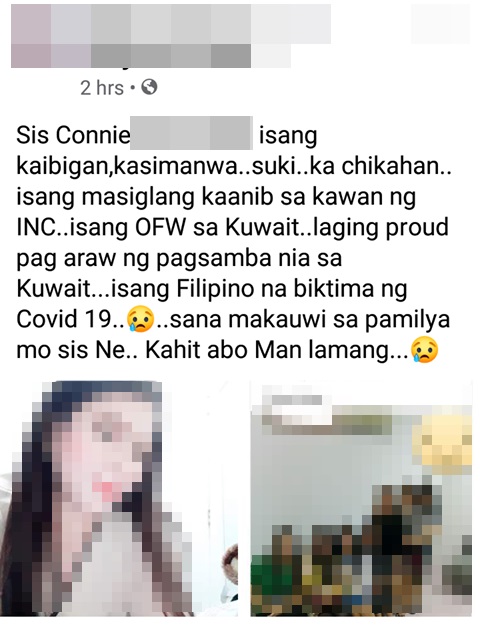 Following the lockdown, it is said that Laureano only stayed inside the house.

“She’s been always generous and helping everyone in the family. She has been working in Kuwait for 17 years now. She started as a domestic helper then she got this opportunity to work at a salon and she helped me come to Kuwait. I know her to be a fighter and a survivor, that’ why I can’t fully comprehend why she’s gone. I’m devastated. We are all in shock,” says Tamao.