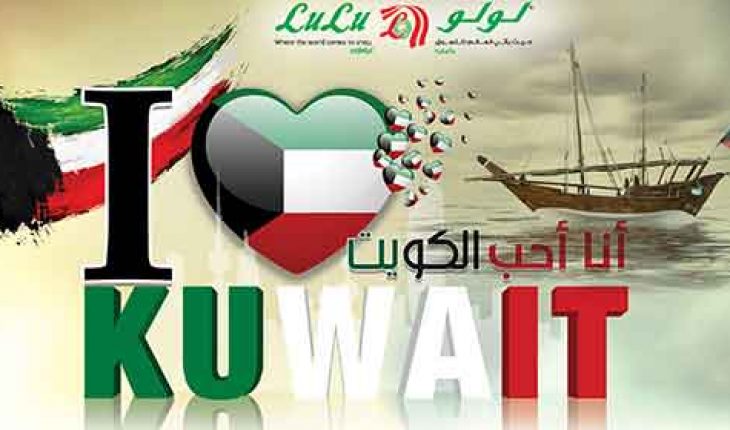 LuLu Hypermarket, the retail-leader in the region, launched its annual LuLu Hala February celebrations on 1 February, with all outlets of the hypermarket decked-up in glittering lights, decorative arches, buntings and Kuwait flags.

As the month-long Hala festival coincides with celebrations to mark the National and Liberation Days during the last week of February, the artistic themes and backdrop images center around these two commemorative days.

Small and large national flags flutter everywhere, while color combinations of the flag form the tone for many of the decorations visible around the hypermarket’s outlets. Large cut-outs of iconic structures and colorful images of buildings and places in Kuwait further add to the festive ambiance.

A slew of promotions will be held throughout the month of February, starting with the ‘Voucher’ promotion on 3rd February. During this promotion, every purchase worth KD5 will enter the shopper in a draw with the chance of winning 131 gift vouchers worth a total of KD15,000.

Each week of the LuLu Hala February festival will be made even more exciting with a ‘Brand of the Week’ promotion, offering amazing discounts on products from that specific brand. In addition, there will be a ‘Product of the Day’ promotion on each day of the month-long festival, during which one specific product labeled ‘Special Deal of the Day’ will be on offer at a very special price.

In addition, during the entire festival period beginning from 2 February, special discount sales will be held on select product categories, including on fashionwear, footwear, ladies bags, eye-wear, toys and accessories for babies.

The month-long LuLu Hala February festival is a continuation of the brand’s commitment to making shopping at any LuLu Hypermarket outlet an exciting and enjoyable experience throughout the year for customers.