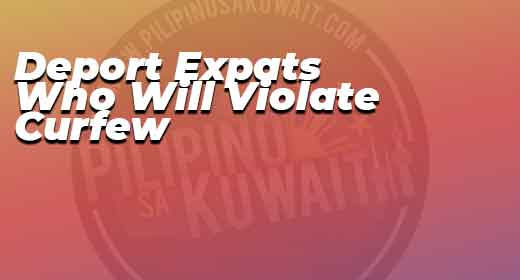 A stern warning was issued by Kuwait’s Interior Ministry against curfew violators.

According to the head of the security media department, Col Nasser Buslaib, expat violators will be facing deportation while Kuwaiti citizens will be referred to the authorities for an investigation.

In case you need to leave your house during curfew hours for emergency reasons, you need to secure a special permit online, the Interior Ministry urges the public.

This announcement is due to the huge number of people, nearly 200, who were caught roaming outside during curfew hours.

On the other hand, MP Safa Al-Hashem is worried about the demographic balance in Kuwait in favor of expats.

“MP Safa Al-Hashem said that the country is suffering today because of the wide-scale irregularities in the demographic balance which is severely tilted in favor of expats by 3 to 1. She said on Twitter that the problem is caused by visa traders and expatriate mafia which has infiltrated into the government and some of them are in important positions and have contributed to the rise of expats,” the Kuwait Times reported.

Furthermore, Al-Hashem claims that she already made a couple of proposals in the past but was unheard, the reason why the country is suffering from the impact of coronavirus, the lawmaker said.

“A large number of lawmakers have already pressed the government to resolve the issue of expats with some calling to offer incentives to expats to leave to their countries to reduce the burden on the health system,” the Kuwait Times reported.